Daily mail- An episode of popular Australian children’s show Bluey is unavailable on US streaming service Disney+ because it was deemed “inappropriate” and did not meet the streaming service’s guidelines. The episode, titled “Family Meeting”, was originally banned because one of the cartoon’s dogs farted in one scene.

However, a Disney Branded Television employee told Pirates and Princesses that the episode will be available soon after they changed their minds. “Family Meeting” will soon be rolling out to US platforms. Some of Bluey’s content did not match the S&P broadcast of Disney Junior at the time the series was acquired,’ they said.

Awww cookies. This is where we are as a country, huh? Banning cartoon dogs from letting a couple fly like dog farts, or at least blaming the farts on the dog, is as much a fabric of the United States as the stars and stripes. Australia should kick our ass straight for this type of pussification.

I’m going to deal with a lot of Disney bullshit because they produce awesome stuff like most evil, super-rich corporations do. They may have slowly murdered ESPN after raising me as a puppy, put the finishing touches to Star Wars death George Lucas started with the prequels (before recording everything with Mando), and have theme parks if dear families no longer sign second mortgages just to give their kids a memory they’ll never forget on a vacation their parents will drink to forget.

Hell, I was planning my first family trip to Disney just TWO DAYS ago!!!

However, after hearing this news, I feel like I have to think twice before booking it. It has nothing to do with the price of a five-night stay in Orlando being roughly equal to more than a week in Hawaii, because I get to visit people in mouse costumes. That’s because the best kids’ show on TV should never be banned, censored, or even edited in the slightest, let alone for something as harmless as that fart chat between parents and their kids.

Who does Disney think is saving with this move? Every human being ever born thinks farts are funny before they even say their first word and their parents agree.

Exhibit A, Your Honor:

So I’m giving Disney until midnight TONIGHT to put the uncensored fart video on all of their digital platforms or else I’ll…probably do nothing. I can’t stop watching Bluey because it’s probably the only thing my kids watch that I love let alone despise and I’m still figuring out how I can give them thousands of dollars for a trip that I regret even before booking it. But pissing off a fat guy isn’t good for anyone, let alone a company that has as much to lose as Disney.

Speaking of farts on Bluey, which is a line I never thought I’d write, I’ll never get to see the characters who seem to fart their names during the amazing intro.

Someone else also told me that they have a dance party where the last person dancing when the music stops is eliminated, hence why they shout everyone’s name and this person moves to the right.

Most mind-blowing shit I’ve ever learned since finding out that Bluey and Bingo are both girls. Yeah, I don’t go out much, but I’m sticking with it and I know I just blew a couple hundred minds by revealing that certain parents.

Speaking of the most amazing intro to the best kids show on TV, get your t-shirts now before our Disney overlords try to snatch them from us! 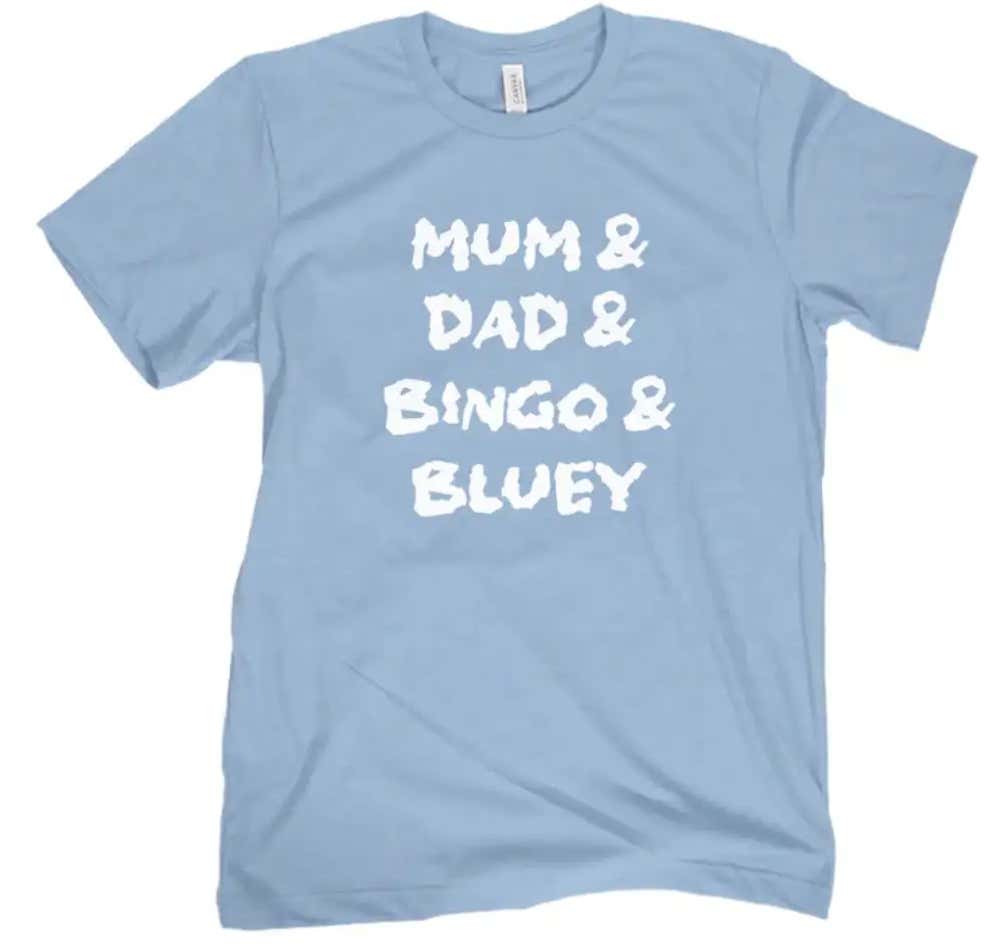 Mandatory Podfathers take since the #Podfam loves Bluey, even though my two silly co-hosts scolded him last week when they’ve never watched ONE episode of it. Fuck these guys (but watch the episode, my kid’s trip to Disney depends on it).